Long Beach to Catalina Island on the Accessible Catalina Express 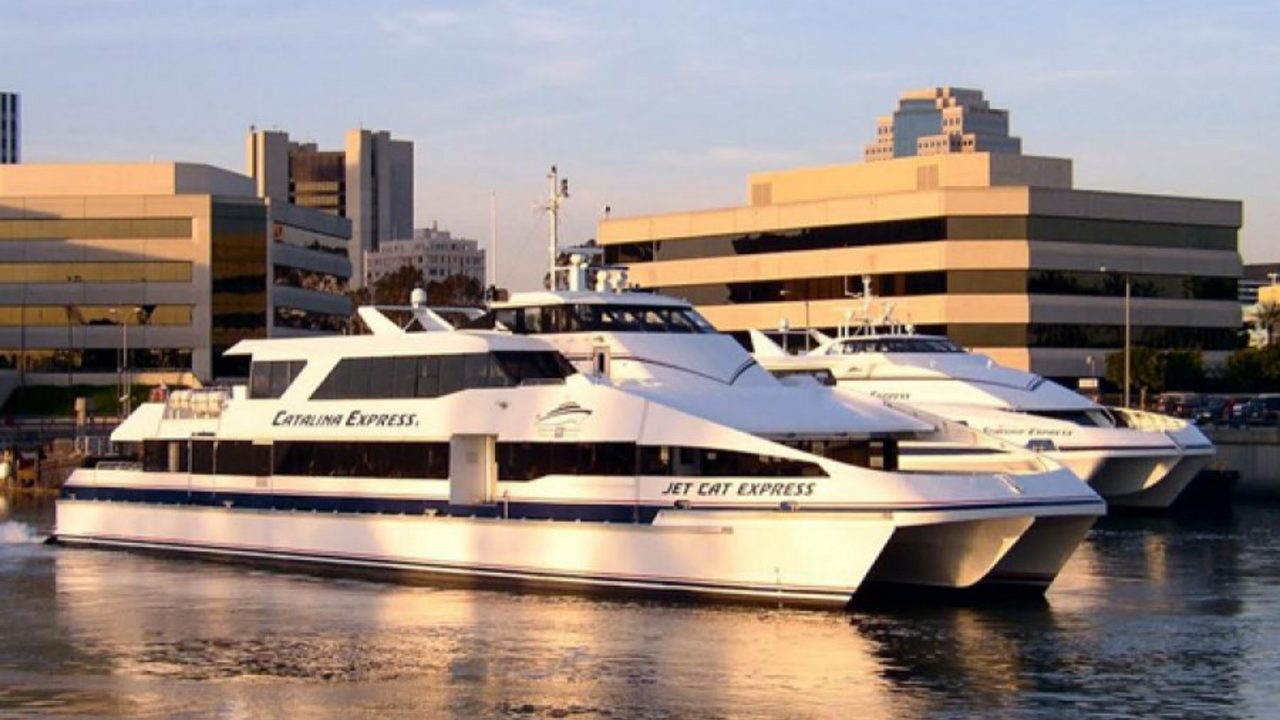 When planning a trip with a wheelchair, what do you want to know?

For us, we are always concerned about accessibility.

Can we get from one place to another and do so comfortably?

That means more than can we get the wheelchair onto the transportation, but what are conditions like as we travel.

How Accessible is the Catalina Express

We were very pleasantly surprised by the experience.  We did not find any issues with accessibility, and the crew was outstanding in their willingness to help passengers no matter their ability level.  We did not encounter any barriers, and while the ramp at Catalina Island was steep we had plenty of assistance getting onshore and back on the boat when we returned.

We will discuss the following topics:

Every Trip Starts at the Terminal

We traveled via the Long Beach Terminal and Avalon Terminal. We will talk about both.

We arrived via a cab, and the driver dropped us right in front of the terminal.  There was a ramp that Cheryl managed with her wheelchair on her own, and I had three suitcases, and a heavy backpack and the ramp worked well for myself as well. 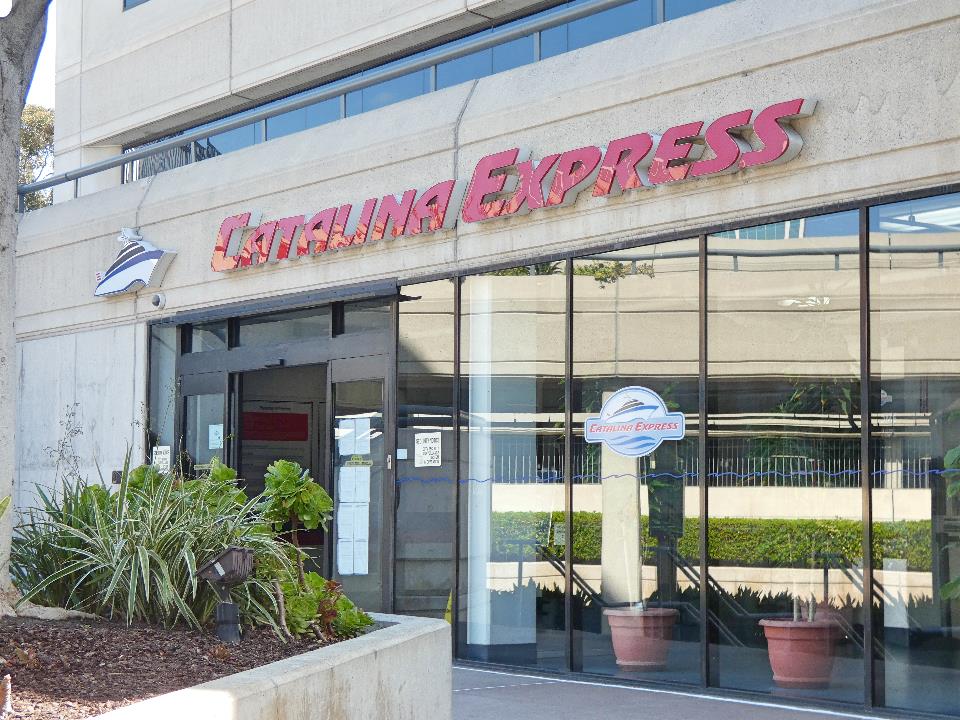 The automatic doors on both the entry and exit of the terminal creating a barrier free entry that worked well.  The line at check in was very short and the process was easy.  The ticket counter at the far left side is lowered to accommodate guests traveling in a wheelchair.

We traveled while masks were required and there was signage everywhere reminding passengers to wear a mask, and everyone one seemed to comply.

The terminal was not crowded at all when we arrived.  We did arrive more than an hour early, we hate to be late and we had just gotten off of the Carnival Panorama.  While we were waiting more and more passengers arrived, but the terminal was never congested enough to be a problem. 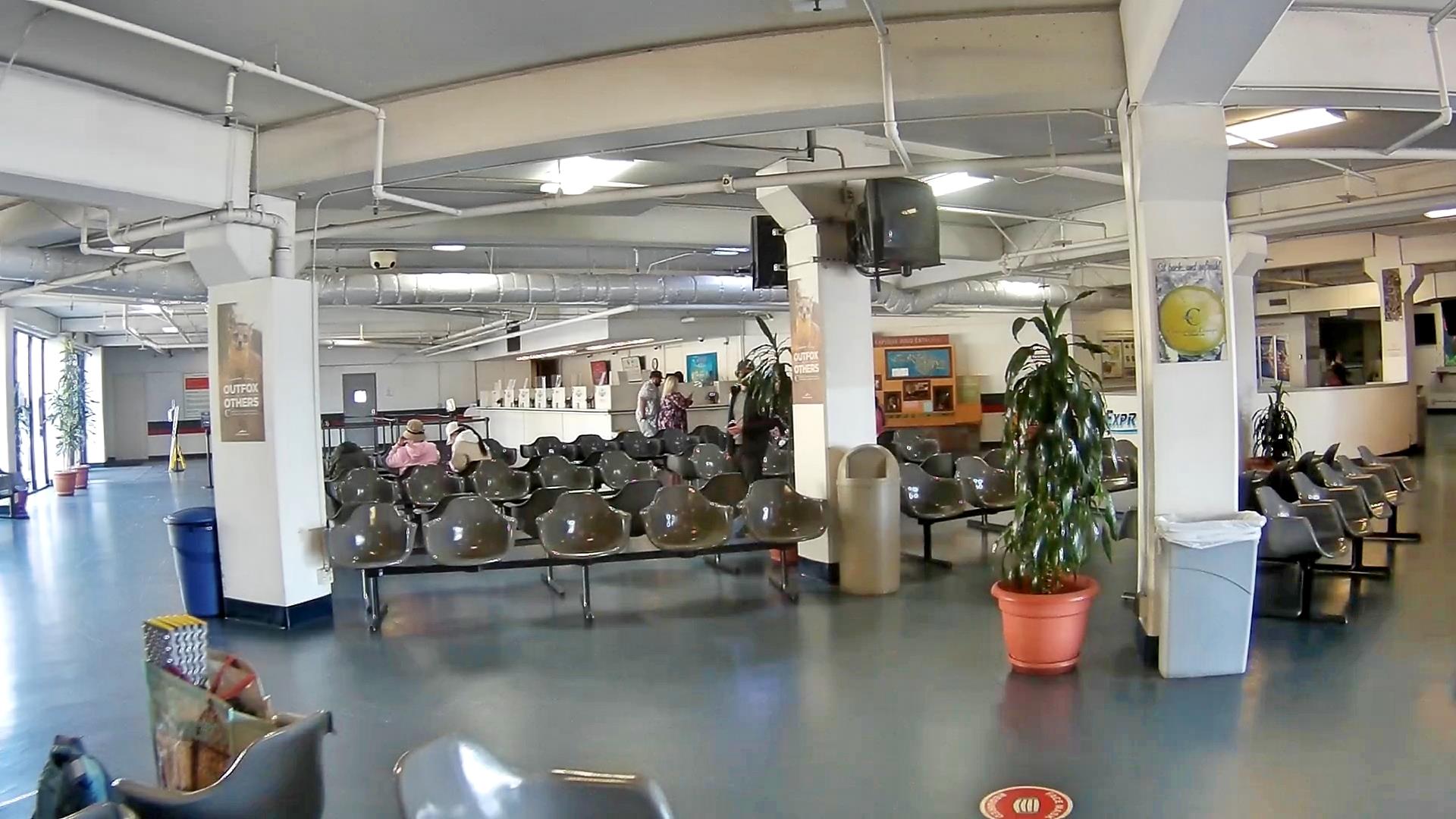 The terminal has a variety of displays including a stuffed Bison.  One thing I would say about the displays, is that not all of them are easily viewed from a wheelchair.  In particular one display has a monitor that is mounted about head height for a standing person, so it was a definite back up and look up to see it. 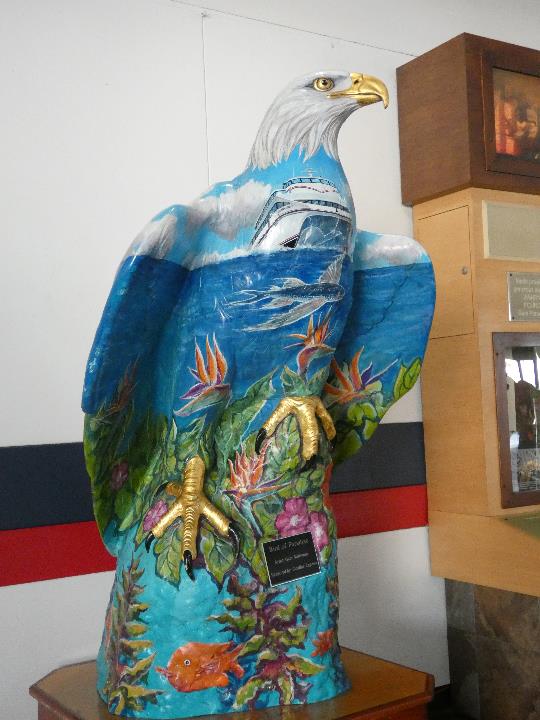 We explored the inside of the terminal. There was a desk where you could pre book tours on the island, and this would be something I recommend if you know what you want to do, since it would save time on the island and you probably would have better availability.  I did not see much information about accessibility on the tours, and this would be a helpful addition. 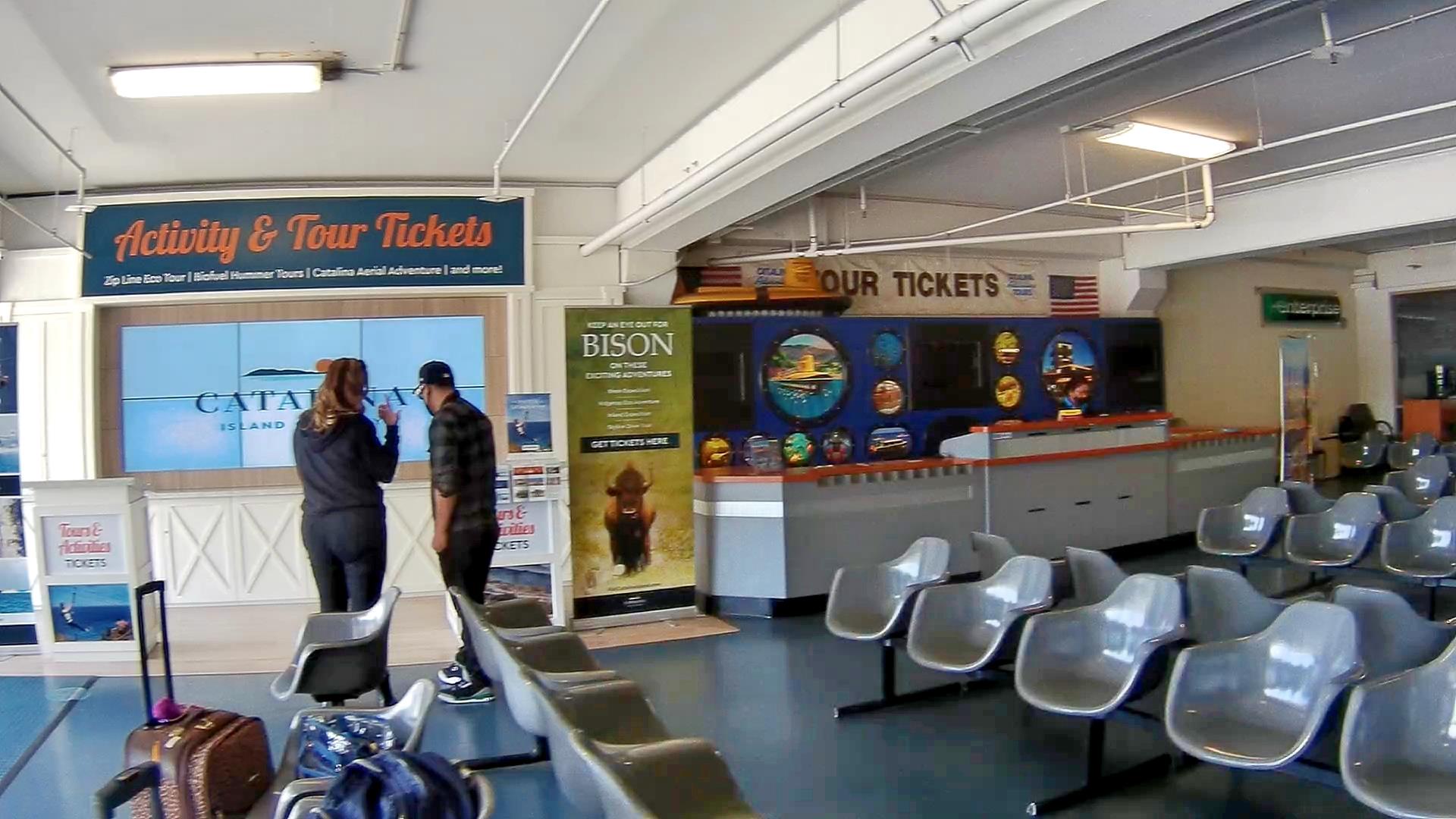 The terminal had accessible bathrooms, though the signage for the men’s room could be improved, it is at the end of a long corridor in a short passage way and there wasn’t a sign.  I found it by process of elimination.

There were several food venues and eating areas that were all closed, but I would believe that it was due to the pandemic and so that will change as conditions ease, I think.  We had some meal bars and munched on those, though had there been food available we would probably have eaten while we waited. 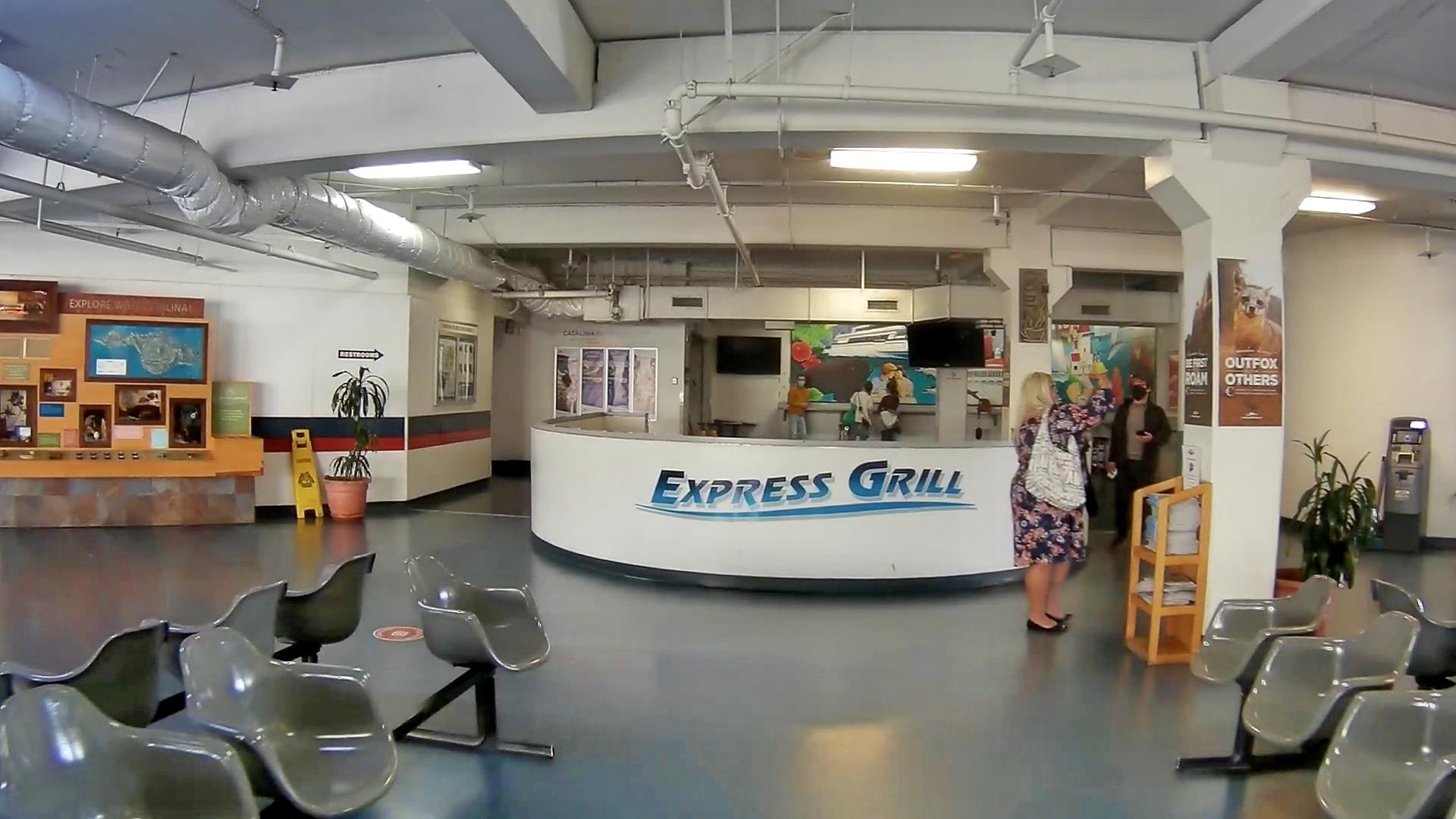 The Avalon terminal was different; it is not in a building.  It was still very accessible, but it consists of a number of retail and food outlets and ticket booths for the Express and Island transportation.  There is some shade available, but it quickly fills as boarding time approaches.  The lack of shade was not a problem while we were there, it was in March and the weather was cool.  On a rainy day, the lack of shelter might be problematic, especially for those with scooters.  You might want a poncho like the one below to keep the passenger and the scooter dry.

The dock, also called the Mole, is a pier that is also used for fishing and fish watching.  The water is very clear, and you could see a variety of fish moving in the kelp beds next to the ocean side of the pier.  On the dock side, you could see Garibaldi swimming in the rocks.  The dock area was very accessible though there were some grates that might pose a challenge depending on the direction of travel and could be avoided by going around them. 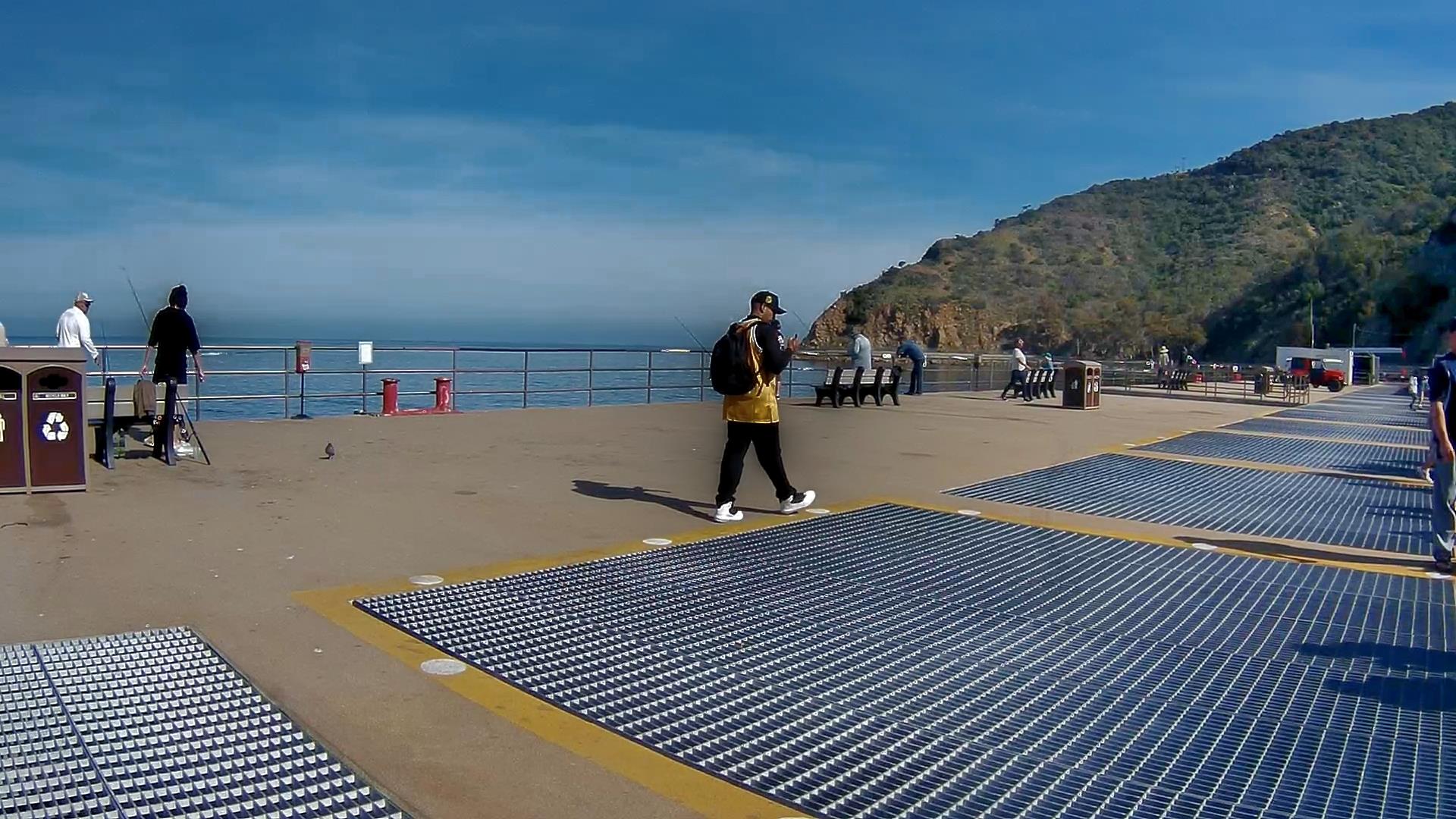 The boarding process was similar at both locations, though the ramp was significantly steeper in Avalon.

The process starts before the boat even arrives.  People will line up between the metal barricades that form the boarding line, and for those that need assistance, there is a separate, unshaded area with seats and a space for wheelchairs.

This process kicks into high gear as the boat docks and the ramps are put in place so people can disembark.  Once the boat is empty then they pre-board those that need assistance.   The way they handle this process could not be better.

The staff will check with each passenger seated in the assistance area and ask if they need any additional assistance.  They don’t assume they know, they ask, and we really appreciated that.

We responded that we could use assistance with the wheelchair in Long Beach.  The ramp was not overly steep, and I could manage the luggage.  I did let them help me with luggage up the steeper ramp to the boat from the dock. 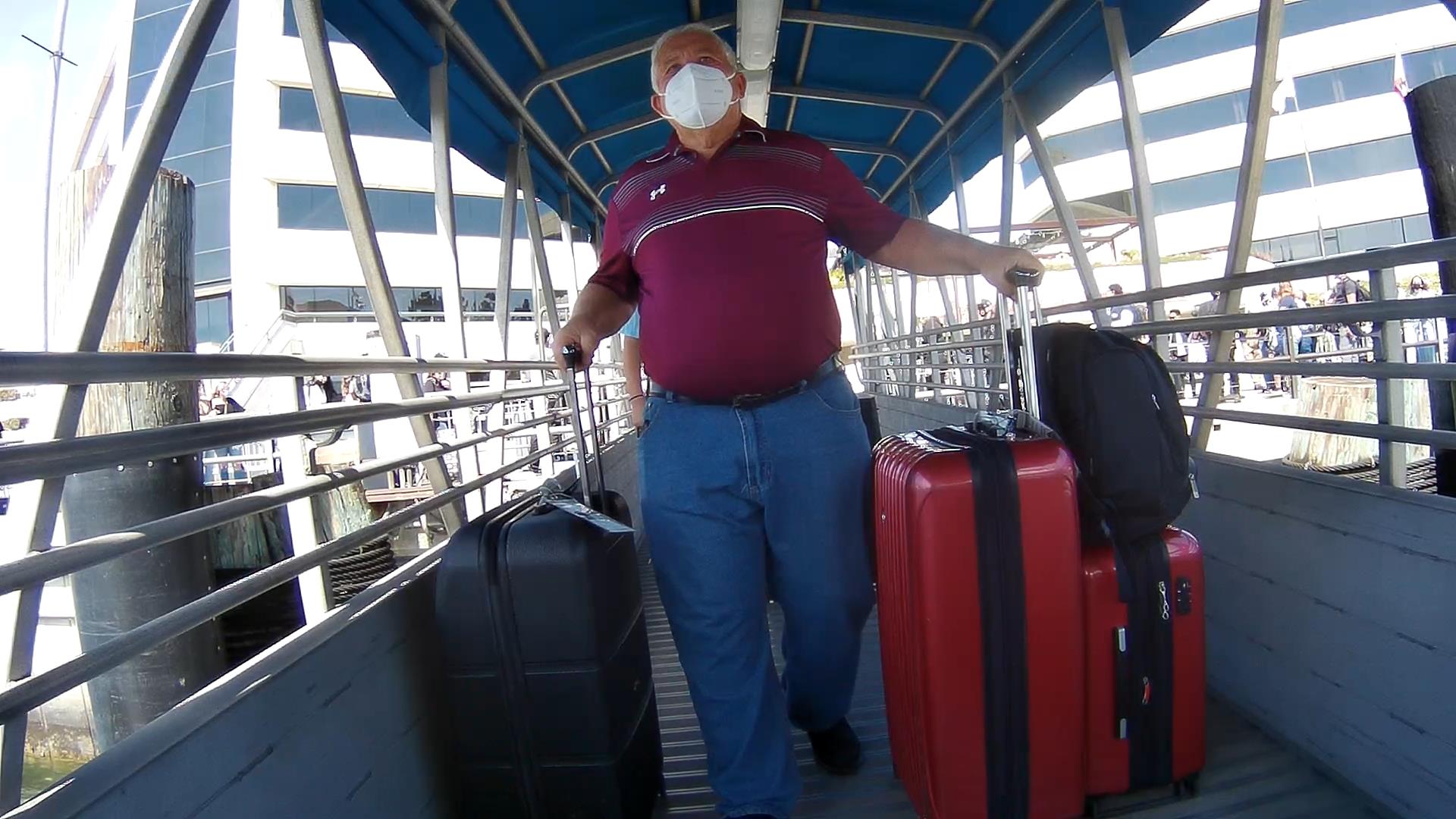 Luggage used for the trip

Disclaimer:  The links above are affiliate links and that means that if you choose to purchase one of those items linked above, I recieve a small commission at not cost to you.

In Avalon, I accepted help with the bags in both directions because the ramp was steep and I am old.  I would also say out of shape, but round is a shape.  Once we were on the ship, the luggage was stowed and they asked Cheryl where she would like to sit and if she wanted to remain in her chair or move to a seat.  In both directions she chose to transfer to a seat.  The view from the seat was good, and it was nice to have a table. 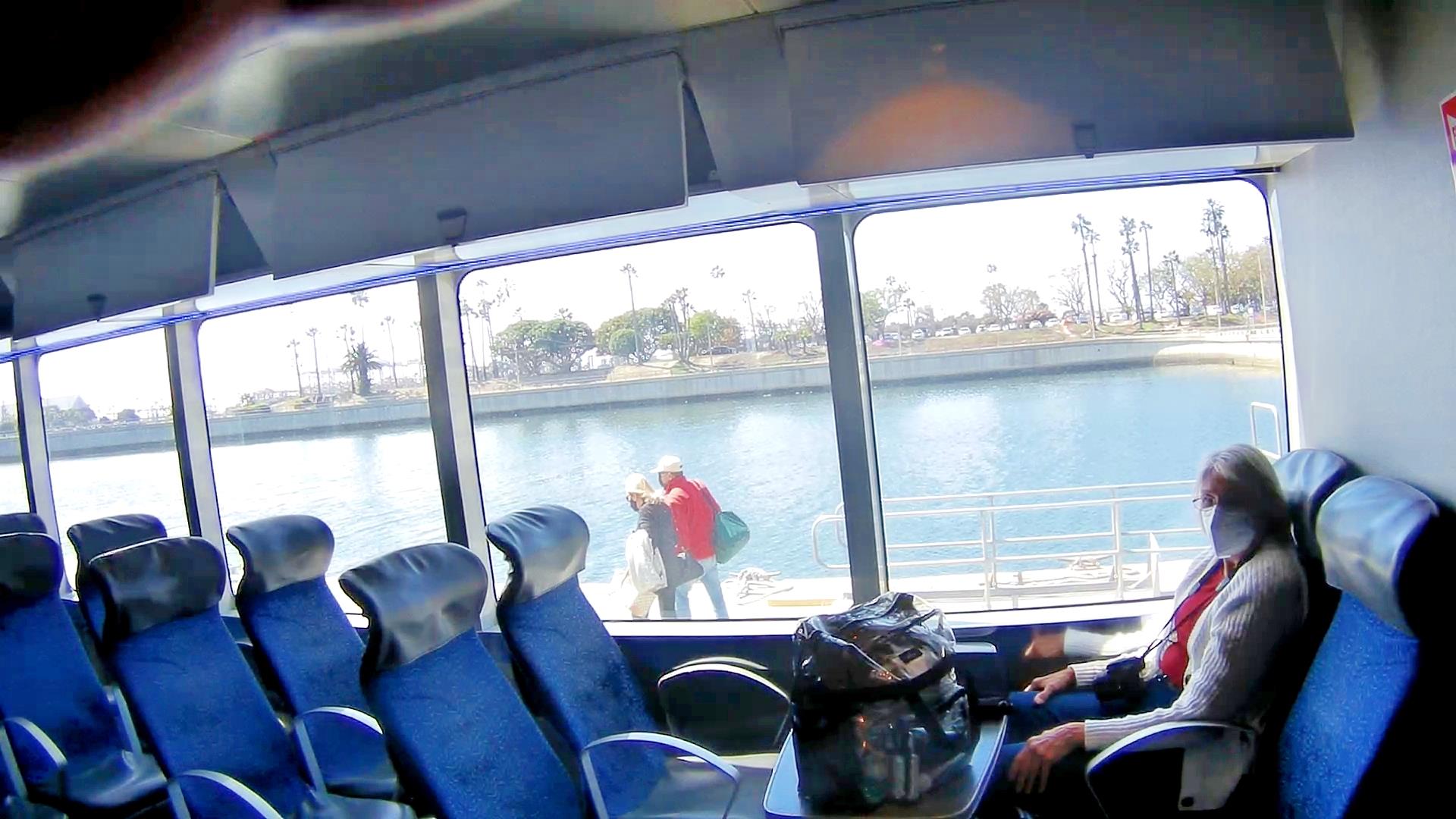 Once she transferred to the chair, the ship’s crew took care of collapsing her wheelchair and finding a secure place to store it for the journey.  Later they retrieved it and helped her off the ship.

The seating area on the lower deck is divided into two areas, and both areas have two types of seats.  There are seats that are configured like first class on an airplane, where you have plenty of legroom, and a drop down table in front of you.

The second configuration is sets of seats facing each other with a table between the seats.  This means that some of the passengers are sitting backwards, which might be an issue for those with motion sickness.  In our case, we chose to face backwards next to the bulkhead.  There were two seats in our row, and across the table, there were also two seats.  Further back in the boat, the seats were three wide in the area next to the exterior bulkhead (wall) which had windows. 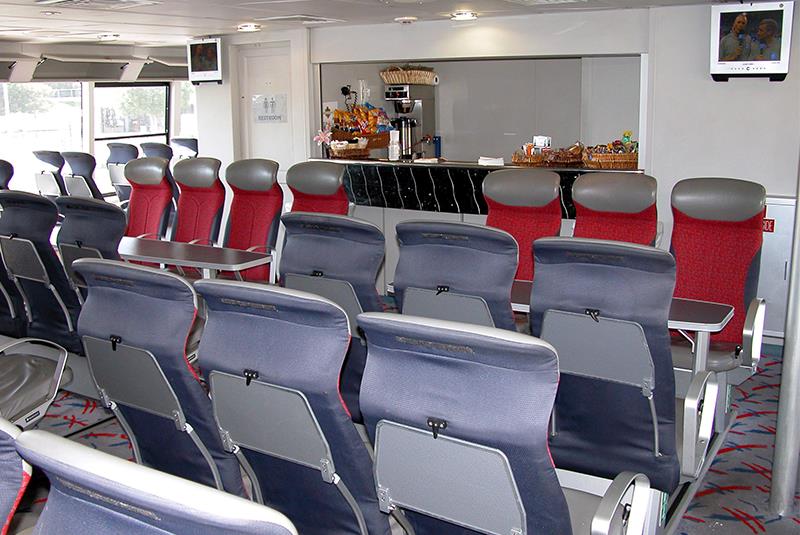 The cabin area was easy for Cheryl to navigate with her wheelchair during the boarding process, if the ship is moving it might be a little more challenging, and there was definitely some congestion in the area by the snack bar and also when it was time to disembark.

The terminals all had accessible restrooms as you would expect.  On the ship, the restroom was accessible as well. 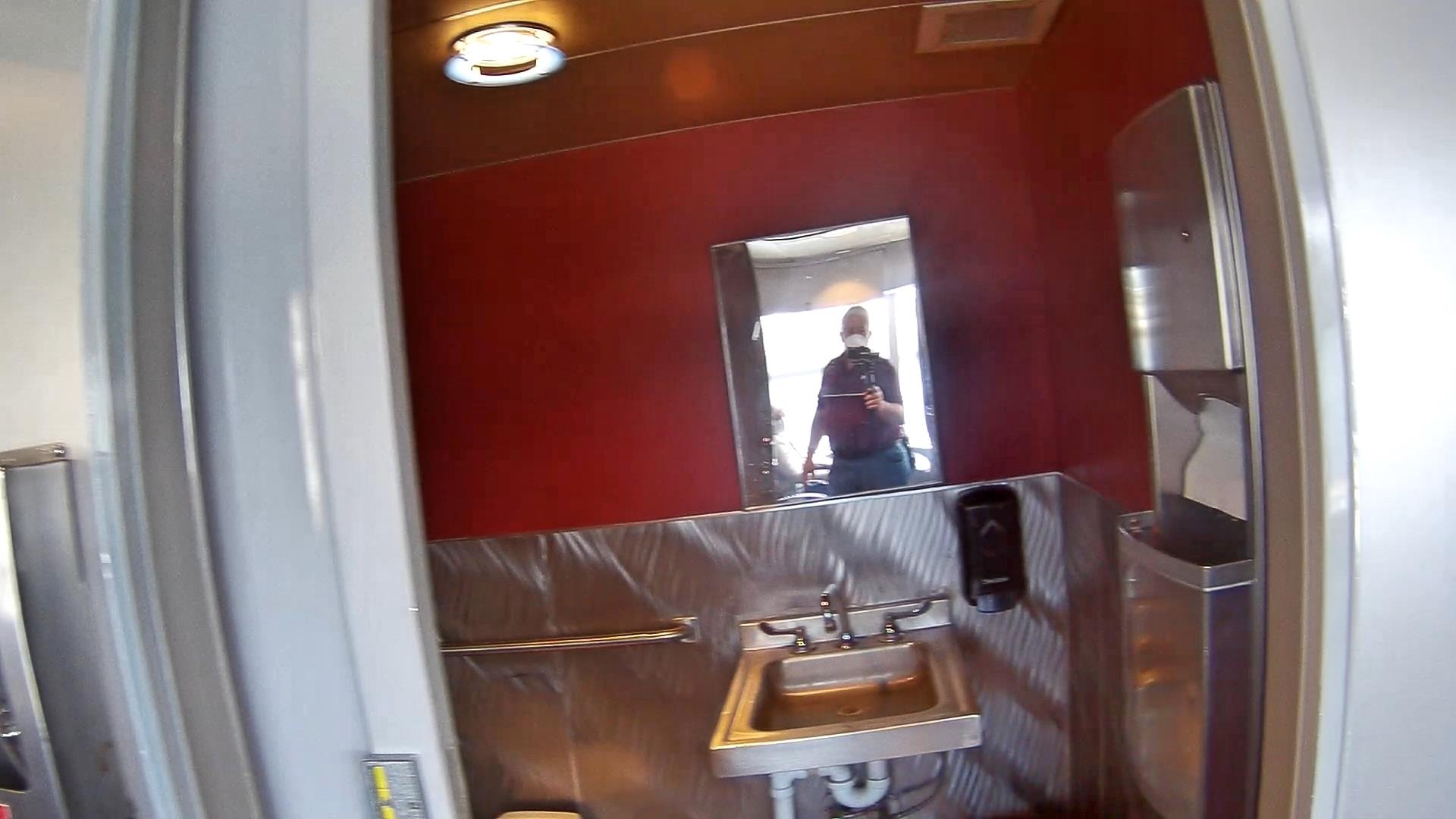 Onboard the ferry, the restroom is accessible as well. It has a sliding door that opens easily and is more than wide enough for most scooters, power chairs, and wheelchairs.    There are grab rails, and it was much better than we expected.

The snack bar was very popular as the boarding progressed and the passengers purchased their snack and beverage of choice.  The bar was well stocked and had some specials.  There was also food available.  The bartender was quite pleasant and had some extra menus she shared with people in line to expedite the process.  We got some bottled water an settled in for the ride.

A solo wheelchair traveler might need assistance in ordering since the counter was a little high, and the congestion could make access difficult.  The cabin attendants would normally try to go around and do seat service.  Because it was spring break, it was very busy, and they were not able to go around

Later in the journey, the lines at the snack bar eased and I chatted with the cabin bartender about the trip and the boat.  Everyone on the staff was always eager to help, and if not occupied, to chat with you.  The staff made the experience exceptional.

I was not sure what to expect for the crossing.  I did know that the waters we would traverse would be fairly protected, but not completely smooth.  Cheryl and I are both good travelers on the water not being prone to motion sickness.

As we got out of the harbor and the captain added power you could feel the boat surge ahead, and on the trip over, there were some moderate swells and you could feel the ship move.  The catamaran hull definitely added stability to the ride.  We never experienced any discomfort, though one of the passengers seated across from us got sick very early in the voyage but to my knowledge she was the only one who did.

This process is well designed, and it felt as if all the passengers must have all been late for a funeral or a wedding.  The staff brought Cheryl her wheelchair and assisted her in getting off the ferry.  Up and down the ramps to the ferry itself, there were two people holding on to the wheelchair making sure that the process was safe. 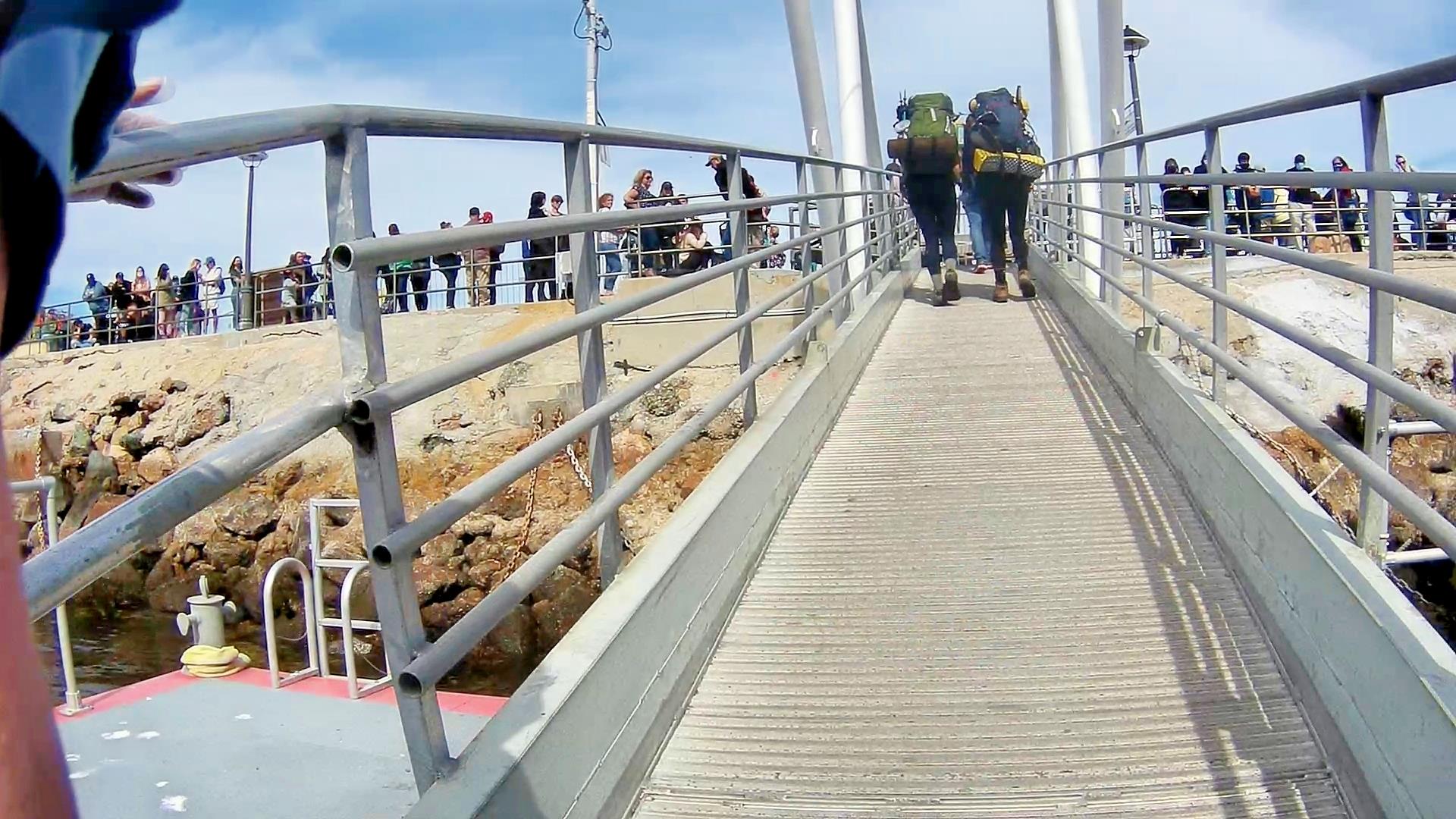 As you leave the ferry passengers who need to claim luggage proceed down one side of the boat, and those without luggage use the side closest to the dock.  For passengers that might need assistance, the staff would help them with the luggage to reach the dock and get clear of the disembarking passengers.

I really appreciated this help because transporting the amount of luggage we had would have been difficult to manage by myself going up the ramp.

Just so you don’t wonder about what kind of weirdos would take that much luggage on a two night trip, I will share that we stayed in 5 hotels and took 3 cruises in a 3 week stretch, so we needed more than we would usually take.

I would rate the entire process as very accessible.  Neither Cheryl nor I encountered anything that would have a real impact on someone traveling on the Catalina Express between Long Beach and Catalina Island.

If you are going to cruise out of one of the LA ports, San Pedro, or Long Beach I would say that taking a day or two to visit Catalina is well worth the time and money.

We did receive a significant discount on our ticket price.  That did not affect our opinions as expressed in this article. 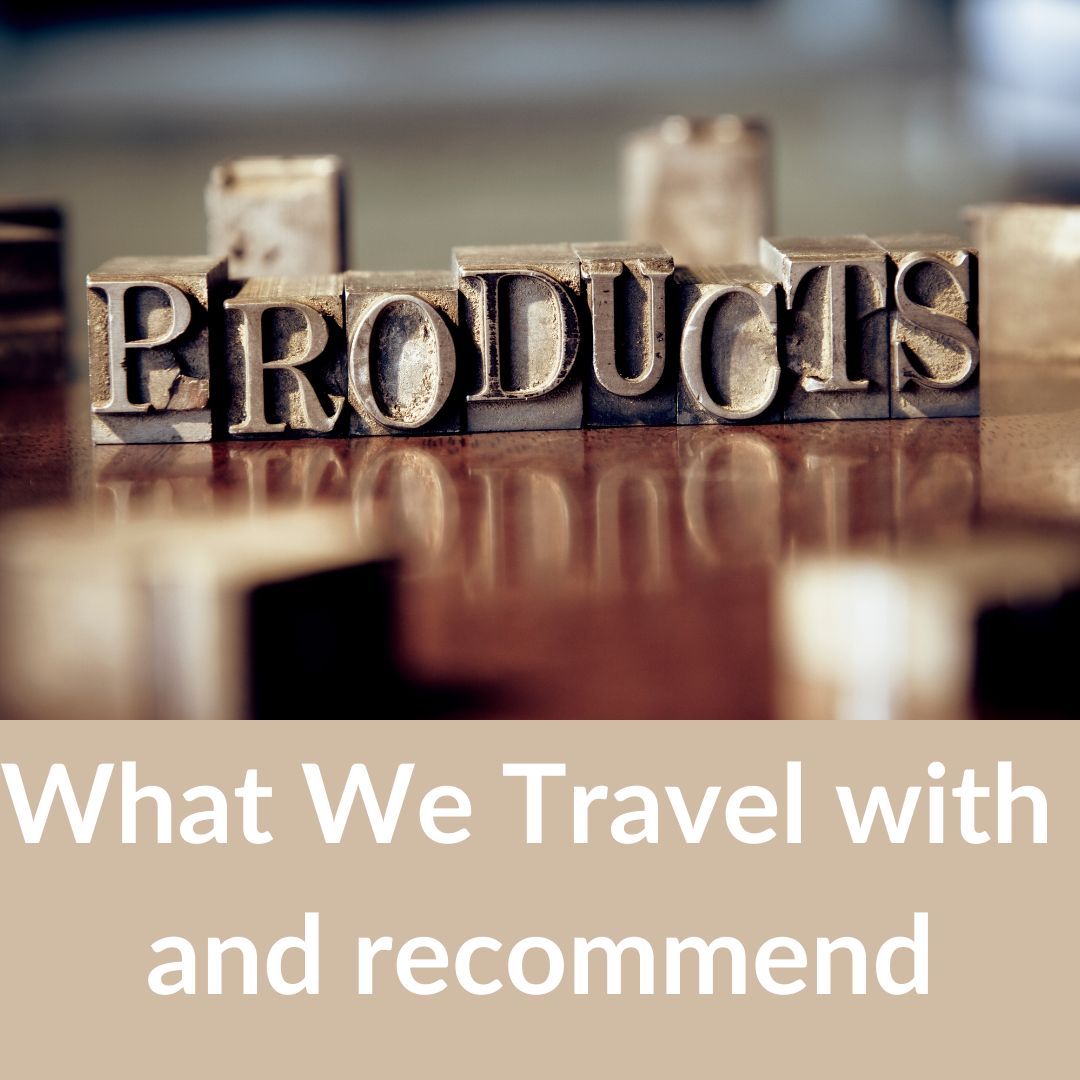